The collected works of Keyframe

Wrote on the subject of Octane2 serial port output at March 12, 2016, 10:23 a.m...
I got this Octane2 at work as a gift (it was supposed to be discarded) so I got tinkering. When I power it up I get a red light on the bar and no output on monitor (I have a VGA adapter on it). I also don't have a ps2 mouse and keyboard for it.

So, reading through forum I understood my best option would be to connect via putty/serial from PC to serial port 1 on Octane2 and ceck out diagnostics. I made sure nothing is connected to it (keyboard, mouse, monitor, I even unplugged vga adapter) and connected with serial modem cable to my pc via usb to serial adapter. I bought both cable and usb-serial new and checked they work with other equipment.

I've tried various settings in putty, namely changing flowcontrol from none to other settings and waited for 10 minutes on each seting cange, but I got no output from Octane's serial.

So, my question is what and how else should I check what's wrong?

Octane powers on, after a few seconds there's a red light and fan gets loud and stays like that with no output from serial.
Keyframe
Who joined March 12, 2016, 10:13 a.m.

Wrote on the subject of Octane2 serial port output at March 12, 2016, 10:42 a.m...
I'm using DELOCK's adapter with FTDI chipset (I made sure it was ftdi). Cable is a regular null modem cable, as noted in Octane's manual. I even tried with an older PC that has serial on its motherboard, but same thing with no output. I tried with regular serial cables as well. I tried on that older PC and with adapter to connect to other equipment I use putty/serial with and it worked, so it's not faulty.

Manual says regular null modem cable ought to be enough. This is getting confusing.
Keyframe
Who joined March 12, 2016, 10:13 a.m.

Wrote on the subject of Octane2 serial port output at March 12, 2016, 3:06 p.m...
I have disconnected everything but power and serial. I then tried numerous combinations of flow control in putty as well as with null modem cable and regular rs232 cable. I even tried on com2 out of frustration and I've tried plugging hdd out as well.

I have noticed, on the back of the machine, that one of those plastic screw things is missing. The one on the top right that is just above graphics. Everything seems to fit in tight, nothing loose though. That can't be an explanation for no console out on serial, no?

I'm not at home now to grab a picture. I can do that later, but I've searched for an Octane picture. Here's Octane 1, but it looks the same from behind. 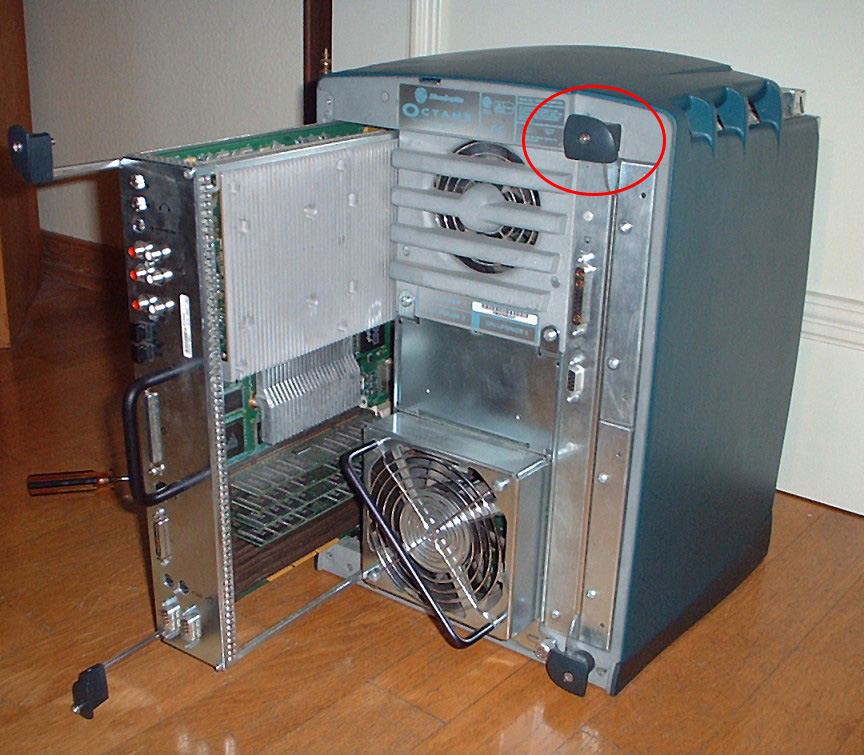 That's the "plastic thingy" that's missing and I'm not sure if Octane 2 also has that metal rod that goes through the case like Octane 1 does. If so, that's missing as well. I have a couple of XIO cards as well as PCI...

However, in the meantime, I've managed to get an image output on VGA. It boots, but still no serial output. After diagnostics sometimes I get that MAC error, sometimes I don't. I've read that's that System ID chip. So, I'll have a look at the system board if it's loose. Anyways, when that error is absent I have managed to boot into IRIX. PROM and root both have a password which I will need to reset (of course, damn), so I can't get into diagnostic console before IRIX still.

One major problem I have now is to get a compatible PS2 mouse. I have hooked up two different PS2 keyboards and both work - I can select with numbers on keyboard diagnostics in boot menu, but PROM has a password, damn. I can't seem to find a compatible USB mouse. I've tried several so far with two different USB to PS2 adapters. I get light on the bottom of the mouse. It's lit, but mouse doesn't work under boot menu or IRIX. Several mice so far and two adapters. Damnit.
Keyframe
Who joined March 12, 2016, 10:13 a.m.

Wrote on the subject of Octane2 serial port output at March 14, 2016, 3:15 p.m...
Thanks robespierre! This has been both helpful and educational. I see that on this picture "thingy" is also missing at the same position as on my Octane2. I have some PCI cards (FC and hippi) in as well and a vbob and external clariion array(s). I'll take it one step at the time though.

My plan is now to open up the Octane and move the jumper in order to reset prom password. I'll also check if that system ID eprom is loose or what. When I get that in order I'll try to delete/rename etc/ioconfig.conf and reboot to see if I can get the mouse working (while also searching for a compatible mouse). Only then will I reset the root password and see if I can hook up clariion arrays to the system. I'm not sure if I can do that since I can't find FC connections on disks - can't locate them on actual arrays.

IF I can make Octane2 operational, I would like to source somewhere a gigabit ethernet card. I have an idea how I can put Octane2 to use since it has a hippi card and I have some older hippi equipment.

I know it's a motherload of questions now, but I have one more if anyone knows.

a) Is it possible to hook up a more modern hard disk, SSD or CF instead of an old spinning rust cheetah as a primary disk inside Octane2? Via some adapters or something...

b) Is it possible to clone (and how) a hard drive onto another to make an exact duplicate? I have some software I would like to preserve on it, but I would like to move it onto a more modern hard drive/CF or whatever that isn't a ticking time bomb.
Keyframe
Who joined March 12, 2016, 10:13 a.m.

Wrote on the subject of SGI Posters / marketing at March 16, 2016, 6:19 p.m...
As a wee lad in 90s I had a poster I got from SGI (in Europe) that had a big Onyx on it, a desk and a car. All CG. It was a calendar set in the far future. They exploited the neat thing that same years in the future corresponded with the exact same dates as the years in the 90s this poster was printed in.

It has since passed a lot of time and I don't have the poster anymore. Does anyone know the poster I'm talking about?

Wrote on the subject of Octane2 serial port output at March 16, 2016, 6:25 p.m...
I opened up the machine and nudged that button battery looking thing and no more errors. It looks like it was nudged during transport. I got a PS2 mouse and found a PS2 keyboard that has correct key mappings and now it all seems to work. I even found a compatible LCD monitor, thanks to a list of compatible ones in this forum. Now I'll have a look if I can make VBOB and two clariion heavy beasts working. I don't doubt VBOB will work, but clariion might prove to be a challenge.

Anyways, thanks for help. I can be proud to say there's an Octane2 with 2xR14Ks @ 600Mhz with V12 and VBOB and 36GB Cheetah now fully operational and working. Sadly, only 2GB of RAM.

Next, I'll see if I can restore and make operational a purple Indigo2 and find out what graphics it has. This might be a bit of a larger challenge.
Keyframe
Who joined March 12, 2016, 10:13 a.m.

To conclude, I feel obliged to post an image, even though it's potato quality. 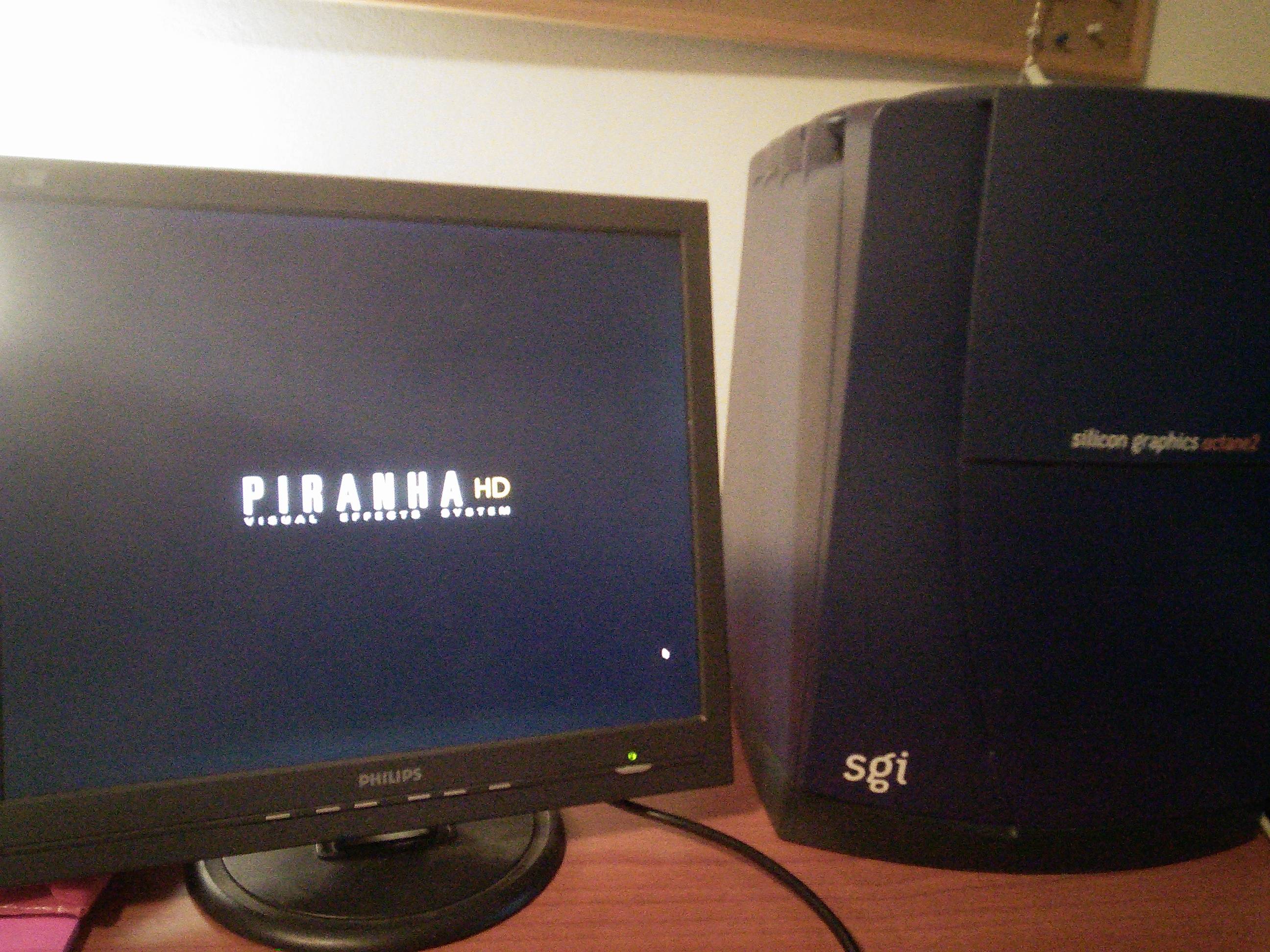 I haven't hooked up vbob to DM still. I think its either 5 or 3. And there's still fibre channel to two clariions and hippi in pci cage/shoebox. Not sure if clariion will be possible to hook up, but I plan to upgrade ram to 8GBs (need 6 1GB modules if anyone is selling!) and a gigabit network card (also need one if anyone is seling). With a gigabit card I could hook machine to a NFS and discard clariion if it's not working.

Wrote on the subject of Email from SGI Support at March 18, 2016, 7:46 a.m...
Of course that this is happening just as I was looking for VBOB documentation. I brought the jinx, sorry guys!

Thanks for heroic efforts of grabbing the whole site down before they have pulled it down!